Innovative technique, creative expression, discovery and entrepreneurship, ... within, and beyond, walls ...

« Craig's List founder: Accepting failure may be a pre-condition for innovation... | Main | Compelling evidence of how powerful an organization's immunity to new ideas can be, and how even the best must have leadership's attention in order to combat it.... »

Posted at 03:42 PM in Noteworthy Examples and Anecdotes | Permalink

The comments to this entry are closed. 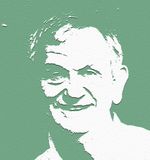